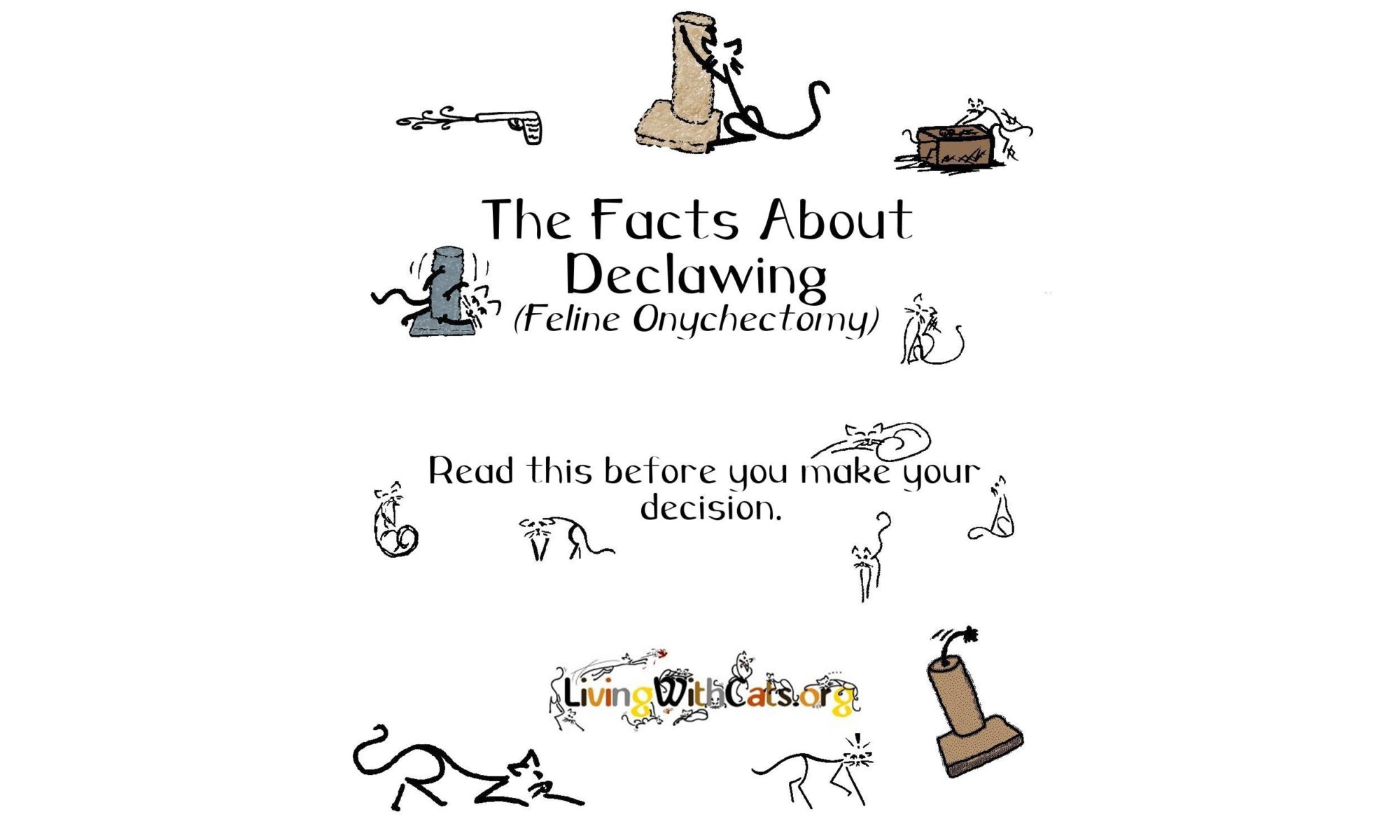 “Paws Come With Claws.   That’s one of nature’s laws.”

-The Humane Society of the United States

Cats have a claw (“toenail”) on the end of each toe.   Cats normally have five toes on the front feet and four on the hind feet.   The fifth claw on the inside of the front paws does not reach the ground and is called the dew claw.

The exterior claw is composed of a hard, nonliving protein that is white to clear in most cats, and occasionally black.   Inside of the claw is living tissue of the nail bed, called the quick, which contains the blood supply and nerve endings.   Claws grow out of the quick, rather like human nails, and the outer bony layer of the claw is shed periodically to expose new growth that is razor sharp.   Just like human nails, cutting a cat’s nails too short is quite painful.

Many cat owners, who genuinely love their cats, have no idea what declawing means to the cats.   Many believe that all declawing involves is simply pulling off the cat’s claws, just like pulling teeth.   This is completely false information.   This is a surgical procedure.   Before you have your cat declawed, read, learn and understand how deforming this procedure is for your cat.

HOW IMPORTANT ARE A CAT’S CLAWS?

Cats exhibit a remarkable grace and agility along with a faultless sense of balance.   Their retractable claws play a major role in aiding them to establish good footing for walking, running, climbing, jumping and scratching.

Did you know that scratching on objects is a natural behavior in all cats?   It benefits them in the following ways:

Imagine what it would be like for you minus the ends of your fingers and fingernails.   You would be unable to scratch an itch or do the things you use your nails for–like untying a tight knot.

THE EFFECTS OF DECLAWING ON A CAT

A cat awakens from being declawed to throbbing feet under her bandages.   Next, severe pain starts.   This pain lasts a good week or so.   Walking is now painful and difficult.   Balance is affected.   Fortunately the pain can be lessened with pain medication.   If you must declaw your cat, be sure your veterinarian gives you pain medication so she won’t suffer so much.

There will be, over a period of time, a gradual weakening of the muscles of the legs, shoulders and back.   Balance is now impaired.   Without her claws she has now lost the ability to grasp and now can easily be injured in a fall.   Did you know that the fifth claw on that front paw is placed somewhat like our thumb and helps the cat to grip when climbing or holding objects?   We had a Humane Society foster cat who was declawed.   One day she attempted to climb a tree.   Due to the lack of claws she had a bad fall and dislocated a hip.   Our veterinarian put the joint back in place and wrapped the leg up.   We were back at the veterinarian’s office a day later, as she had managed to get out of the bandages and in doing so, dislocated her joint a second time.   This time she healed fine.   This was an expensive offshoot as a result of declawing–not to mention all the pain she had to endure.   By the way, this cat had been declawed a long time before we got her.

It is difficult to imagine why (if one really cares and loves cats), one would even consider declawing.   People who resort to declawing care more for their furnishings than the well-being of their cat.   Declawed cats are not accepted in cat shows since it is such a cruel treatment to a cat.

Emotionally, the cat will now feel defenseless and must now live in a more constant state of stress which, in turn, will cause her to be prone to more illnesses and diseases.   (Most of us are aware that living a stressful life is not good for our health.)

A cat’s claws are a major defense weapon against attack by another cat or animal.   Claws are also a great escape tool enabling the cat to climb to safety from a menacing predator.   Without her claws, she becomes very vulnerable to attacks from other animals.   After declawing, a cat can never be allowed to go outdoors, unless on a leash and under close supervision.   There may appear to be no dangers to her, but danger can pop up out of nowhere (say a large stray dog, or a wily tom cat) and your cat could be seriously, if not fatally injured.

Is it worth endangering your cat in this way, by declawing her?   Cats have been known to slip out of homes.

There will be changes in the cat’s personality and temperament.   You will probably view these as negative changes.   Your cat will be different.

Declawing is a cruel and deforming procedure.

The American Association of Feline Practitioners (AAFP) proclaims that “Surgical declawing is not a medically necessary procedure in most cases.”

HOW A CAT IS DECLAWED

Declawing is a surgical procedure in which the entire last bone on each of a cat’s toes is amputated.   There are three bones in each toe, with the claw growing from the end of the last bone.   (see diagram of a cat’s foot to the left).   The fur is not shaved from the cat’s feet for this surgery.   The procedure is performed under a general anesthetic so the cat feels no discomfort.   The feet are scrubbed and soaked in an antiseptic surgical solution.   A tourniquet is used to stop the bleeding, then each claw is expressed and surgically removed at the joint, leaving only smooth white bone.   Each toe is then sewn closed with absorbable suture material that will not need to be removed.   Once all the claws on a paw are amputated, the foot is bandaged snugly to control post-operative bleeding, and the tourniquet is then removed.   A couple of days of hospitalization is required (until the bandages are removed.)

This is equivalent to cutting the tips of your fingers off at the end joint.   The procedure is very painful to the cat for a minimum of one week, even with medication for pain given.   Some cats are in pain for a much longer period of time.

Upon the removal of this last joint in each toe, sensory and motor nerves are also cut.   Nerves do not repair themselves for many months.   The cat must learn to walk, run and jump all over again, minus the ends of all her toes on her front feet.   (Rarely are the back foot claws removed.)  Some cats suffer pain from this surgery for their entire life span!   We have encountered this.

There is an alternative surgical procedure to declawing called a “tendonectomy”, in which the surgeon removes a piece of the flexor tendon that controls the cat’s ability to flex and extend her claws.

A tendon connects the second and third bones of the cat’s toes and controls the extension of the claws.   The cat is anesthetized, then each tendon is cut and a tiny portion removed so the cat can no longer flex or extend her claws.   The incisions are closed with skin glue, and the cat, after spending the night at the veterinary hospital usually goes home the next morning.   The cat’s claws are not removed, but they remain permanently extended.   More than half of the cats who have this surgery are able to use their claws to some extent, but are unable to scratch normally.   The cat is now unable to sharpen her claws, and the claws quickly become rough, thicker, and grow excessively.   The nails must then be trimmed on a regular basis.   Scarring, gnarling, and atrophy of the toes become a distinct possibility.   This surgery is too new to have any published findings of the long-term effects to cats who have undergone it.