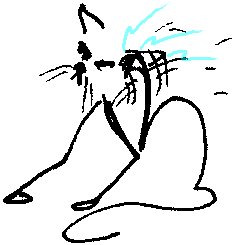 We found something interesting in a cat book once.  Apparently, ear mites can be transmitted from cat to human ears–if you try hard enough!

The Man Who Gave Himself Ear Mites

Yes, someone really gave himself ear mites to prove that people could catch them from cats.  But it’s not a problem for the average person, because he had to work hard to get the infection established, and then he didn’t treat it.

It was indeed an unpleasant experience for him.  He continually heard scratching and moving sounds in his ear and suffered from itching and pain.  Eventually, it died down on its own.

For this sacrifice, he received not the Nobel Prize but the Ignoble Prize.  Plus his “accomplishment” ended up in the veterinary textbooks–and in some…silly stunt…books as well.

The symptoms for ear mites in people are probably similar to the ones for cats; holding your head to one side, shaking it, scratching your ears, and finding dark specks in there.  If you have these symptoms, check your cat.